Would You Use a Good Luck Charm While You Play Bingo?

We would all like to get a bit of extra luck when we play bingo but how far would you be prepared to go in order to try and get this? 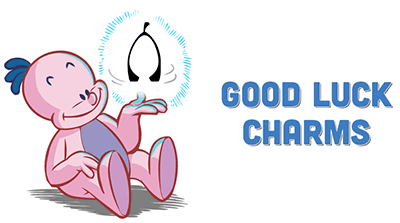 Some people like to carry about good luck charm all day, have one in their house or even do things in a certain way in order to try and generate some extra luck. Would you be happy to use any of the following good luck charms?

We know that online bingo is a game of chance and cool perks such as the new rewards program will further improve your odds of winning delicious cash size prizes. But the majority of players still believe in lucky charm when playing.

Today we take a look at some of these good luck charms and how they can improve your chances at winning in online bingo!

This is a good luck symbol that is used in the world of Feng Shui to bring wealth, unending love and happy life. In the Indian culture, this symbol also represents the goddess of wealth. The Mystic Knot symbol is made up of a series of interlinked loops and is often described as being the image of a snake swallowing its own tail. The Mystic Knot can be found on charms, necklaces, amulets and in a lot of other different forms, with red being the most common color. If you want to follow the Feng Shui approach then this good luck charm should go in the southwest corner of the room you are using it in.

Crickets in the House

The next good luck charm is a bit gross but, hey, maybe it’ll get you a big win and you won’t mind. Crickets are viewed as bringing good luck in a number of different cultures around the world. In Brazil, for example, when crickets start to sing it is said to be a sign that it is either going to rain or you are going to get a lot of money; we know which outcome we would prefer. The Chinese believe that having crickets in the house is good luck, as the huge number of eggs they lay is assign to abundance and prosperity. A similar theory exists in Barbados, while crickets are hugely important in Native American cultures. If you want to try and get some good luck with the help of cricket then maybe you could keep one in a cage, as people do in some countries.

In the Western world, a rabbit’s foot is one of the most popular good luck symbols. However, would you be happy having one sit next to your computer while you play bingo games? This is one of the most common good luck charms in many parts of the world and is also one of the oldest, with its use being dated back to possibly 600 BC. If you are going to use one of these charms then you need to get it right. First, it has to be the left hindfoot. Secondly, the rabbit has to have been caught in a cemetery. Some people will tell you that the phase of the moon or the date is also important. These are among the most common good luck charms used by American gamblers and you should be able to find some for sale in a curio shop without too much trouble. You might even find one with a handy keychain on it.

If we go back to Feng Shui for a moment, we will find that a red envelope with coins inside it is viewed as being a powerful symbol of good fortune and prosperity. It is classed as a way of respecting and protecting the passing on of age-old knowledge and it is common for Chinese families to use red envelopes when gifting money. There is an interesting story behind the importance of red envelopes, though. A young man killed a fierce dragon that had been terrorizing his village and was rewarded with a red envelope filled with money. If you are going to use the red envelope technique for good luck then put some coins in it and then place it in the southeast corner of the house or in your purse.

Another good luck charm most of us are aware of is the four-leaf clover. However, have you ever actually seen one of these things? Well, while they aren’t common they do exist. It is estimated that for every 10,000 three-leaf clovers there is one with four leaves. This symbol of good luck is strongly associated with the Irish and they say that the four leaves each represent something different. The first one is for faith, the second for hope, the third for love, and the fourth for luck. If you have no luck finding one then you can either buy a real one online or else get a piece of jewelry or a key ring with the image of a four-leaf clover on it.

Another popular Chinese good luck charm is the Laughing Buddha. If you want to use one of these symbols at home then, according to Feng Shui principles, the best height for a statue is said to be 30 inches. This guy is said to be a reincarnation of the original Buddha and was a fairly eccentric monk who brought a lot of joy and laughter to the world. Having one at home is said to offer you happiness and wealth. If you want to see if he can bring you some good luck at bingo then you should place him facing the front door of the room you play in.

The so-called Beckoning Cat or Waving Cat is another oriental symbol to attract good luck for the owner. In this case it comes from Japan and is called Maneki-neko there. This good luck charm has now spread to many parts of the world and you shouldn’t have too many problems finding one for sale.  It is also called the Fortune Cat or Lucky Cat by some people and is said to be ideal for bringing good luck when placed in a home or business premises. The gold colored models are highly popular, although with a bit of research you should be able to find other colors too.

Winners will be picked at random and credited by Monday, Oct 20th 12pm ET.